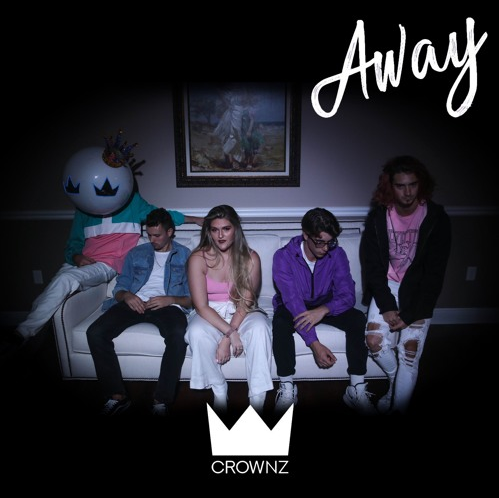 Florida-based alternative pop band Crownz have released a music video for their new single “Away,” out on all digital platforms NOW. The playful and energetic anthem is a unique fusion of synth-y pop and pulsating rock instrumentation. Their debut single “Our Way,” released in late summer, quickly racked up 70,000+ streams on Spotify, putting them on the radar of many. Although a relatively new band in the game, Crownz’s identity is clear-cut, youthful, and a whole lot of fun.

Everyone wants to stay young. Crownz is no exception. Comprised of 5 ambitious twenty-somethings—Karly, Bryce, Jake, Christian & DJ Crownz – this vibrant group has been graciously dubbed a modern day “Peter Pan & the Lost Boys,” as their music illustrates love, pain and their shared fight against the threshold of adulthood. Continuing the trend, Crownz even defies the pseudo established laws of genres as their sound is not just relegated to a DJ spinning pop in the club circuit. Far from it. Their lyrics and music are a playful fusion of synth pop, EDM and trap combined with analog rock instrumentation to create a futuristic sound with a hint of ’80s lineage. Jarring synth arrangements, swoops and plucks of airy guitars, empowering vocals and clattering drum claps of a thousand drone armies defines their approach as modern and ambiguous enough to appeal to any rebellion. It should come as no surprise that Crownz matches their stellar sound with a perfectly formulated stage show including syncopated, detailed light displays and non stop energy permeating throughout their raucous performances.

Crownz’s new single “Away” is available on all digital platforms NOW.